The News Media Association has launched a drive to defend the Freedom of Infomation Act which faces a grave threat following the launch of a consultation by the Independent Commission on Freedom of Information.

The NMA is encouraging members to respond to the consultation and has created a new FOI section on its website with briefings and examples of FOI in action. The consultation closes on 20 November.

Lucy Gill, NMA legal, policy, regulatory affairs advisor, said: “It is so important that members respond to the consultation and write to Ministers and MPs about this. That is why we have sent around a briefing and campaign materials to all our members.

“The measures being consulted on are an onslaught on the public’s right to know. Proposals to charge fees for requests are tantamount to an information tax. It will make the diligent monitoring of public authorities prohibitively expensive for public and press alike. Removing whole swathes of information from FOI would be turning the clock back decades on official transparency.

“The whole sector must stand up for the right to know and stand against secrecy and the information tax.

“It is essential that all supporters of the FOIA make their voices heard at this time. That is why NMA will be asking its members in the national, regional and local press to show the Commission – and the Government – how they use the FOIA to benefit their communities and enhance the public good.”

At its annual coonference this week, the Society of Editors launched its ‘Hands Off FoI’ campaign in conjunction with HoldtheFrontPage and Press Gazette.

Speaking at the conference, Maurice Frankel, Campaign for Freedom of Information director, said: “If we don’t do something about it, the act is going to be seriously restricted.”

Mr Frankel said that the Independent Commission would be looking at “protection” for internal discussions, which included Cabinet discussions and risk assessments by government and local authorities.

The Commission will also examine whether there should be a veto, and if so, how should it be used and what if anything should be done to limit the burden of the FOI act on public authorities, which would include looking at the introduction of costs.

Mr Frankel warned that these areas of discussion had wide implications and could lead to important information becoming lost.

He said that in 2003 the Irish Government introduced FOI costs which included a €15 application fee, a €75 fee for applying for internal review and a €150 fee for going to the Irish Information commissioner.

As a result, FOI requests fell to a quarter of the previous levels, reducing the scrutiny of public authorities, Mr Frankel said.

Mr Frankel called for newspapers and editors to demonstrate the importance of FOI and exemplify FOI’s ability to expose wasteful spending and malpractice.

A powerful example Mr Frankel used was the comparison of the 2010 and 2011 FOI requests which revealed the number of patient safety alerts issued that NHS trusts had failed to comply with.

Alerts are issued when serious risks to patient safety are discovered and each trust is required to report when they have implemented the necessary safety precautions.

The publicity of the FOI in 2010 led to substantial improvements in the following years, Mr Frankel said. 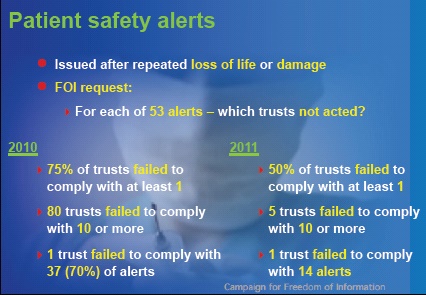 Last month a letter of concern was sent by more than 140 news organisations to the prime minister about the Government’s approach to the FOI Act.