The director of BBC England paid tribute to the “power of local reporting” at the inaugural Local Democracy Reporting Service conference and awards.

In a speech to 180 journalists, she said the scheme was now seen as a success “within the BBC, across the media industry and in the corridors of power.”

In  the early stages of the project there were doubts about whether the service would get off the ground, she said.

“We’ve come a long way in a short period of time,” she added. “There’s a new culture of collaboration that has emerged.”

Mrs Thomas also confirmed the scheme would be launched in Northern Ireland this summer – bringing the number of reporter posts to 150 – and that plans for a new Local Democracy Foundation were in progress.

She went on to thank reporters for their “hard work, diligence, persistence and tenacity.

“I’d also like to say thank you to our partners – nobody could have done this in isolation – the News Media Associaton and all the news providers both large and small who are part of this partnership.

“We all know the difficulties, the changes in media consumption have had on the news industry as a whole. That’s why what we’re doing with the Local News Partnership is so admired and seen as part of a sustainable model for the future of local journalism.

“Other countries are beginning to notice too. We’ve had interest from America, from Canada, Italy, and from Scandinavia. In fact, in New Zealand a pilot based on this scheme has now been launched.

“They see partnerships like this as one of the solutions to the challenges of funding important local journalism.”

The Local News Partnership was launched in January 2018 by the BBC and the News Media Association.

Since then, the reporters have filed around 90,000 stories on all kinds of public bodies, including councils, police forces and the NHS.

Tuesday’s event at MediaCityUK, Salford, was the first time all reporters had been in one room together. They were joined by fellow journalists from regional news outlets and the BBC.

Here’s me talking to @JoeSweeneyLDR about life as an #LDReporter that we filmed during a session on smartphones at the Local Democracy Reporting Service Conference today. I do my usual waffling but I thought I may as well share it with the world 😜 #LDReporter pic.twitter.com/oowQOXEe5l

They took part in workshops and listened to speakers, including the chair of the NMA/BBC advisory panel Jeremy Clifford, JPI Media editor in chief.

Mr Clifford said:  “Today has been a showcase for the excellent reporting of more than 100 local democracy reporters.

“These reporters demonstrate through their journalism every day the value of their work in shining a light on the workings of people in public office.

“It is right that we now look at ways in which this scheme could be expanded for the benefit of local news outlets, the BBC and, most importantly, the public.”

The conference also saw LDRs recognised for the efforts with a new awards scheme which saw GloucestershireLive LDR Leigh Boobyer crowned LDR of the year.

In a panel session, Julia Gregory, LDR covering Kensington and Chelsea and Westminster, Hammersmith and Fulham and City of London, spoke of her experiences covering the Grenfell Tower tragedy and its aftermath.

She said: “I do a lot of stories about mental health post-Grenfell. People sleep three hours a night quite often — that includes councillors. I was invited the night before the anniversary to a private vigil I’m a reporter and I was the only one.

“Grenfell dominates – trust had been completely eroded. I have a positive message from someone who said: ‘Democracy dies in darkness and you shine a light those in positions of responsibility.’” 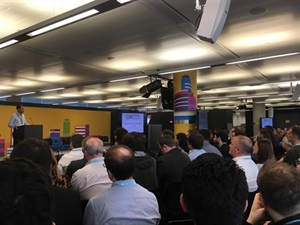