The Housing, Communities and Local Government Committee has launched an online public survey inviting respondents to set out how they have used the planning system in the past and ways in which it could be improved in the future.

The NMA is encouraging news publishers to submit their responses to the survey to address concerns around removing the requirement for public notices to be printed in local newspapers. The survey will close at 11:59pm on 11 November and you can submit your responses here.

The News Media Association has previously warned that removing the requirement for public notices to be printed in local papers is likely to foster a more secretive, less open Government and to many grass roots issues being decided without proper consultation and debate.

MPs and news publishers continue to urge Government on the need to safeguard the requirement for public notices to be published in local news brands. 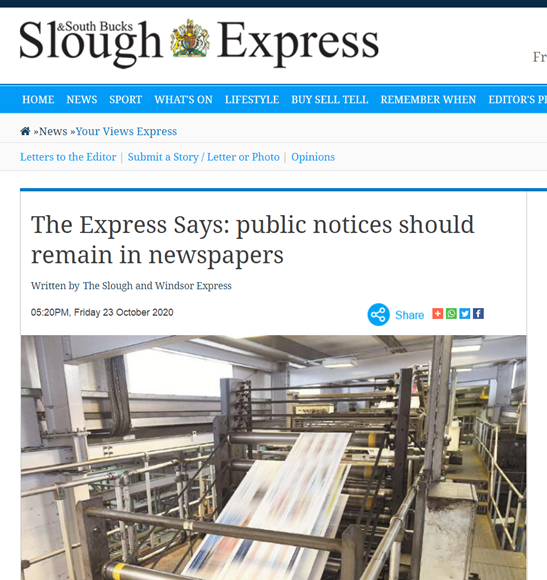 The EDM has been backed by various political parties; MPs from Conservative, Labour, DUP, Green Party, and Independent parties have all signed to support the motion.

The EDM also acknowledges that removing the requirement to publicise public notices in local newspapers would “make the planning process less transparent, less accountable and less democratic” and has urged the Government to recognise local newspapers as the best place to “distribute and publicise impartial factual details about planning applications in the form of planning notices.”

Initiatives such as an online public notice portal and website listings are ways in which the planning process can be modernised as well as channelling the reach of news brands’ growing online audiences, ensuring open democracy for local communities.

In addition to the survey, the inquiry has also opened the consultation up to submissions from the public, with a deadline of Friday 30 October 2020.