The News Media Association is calling for the existing business rates relief scheme for local newspapers to be expanded in order to help publishers combat the dramatic declines in ad revenue caused by the coronavirus pandemic.

In a series of recommendations sent to the Chancellor Rishi Sunak, the NMA is urging Government to extend the relief programme further by 80 per cent. This will help ensure publishers have relief which help them to adapt to the increasingly challenging news media environment and are able to continue to produce trusted local journalism which the public want in even greater numbers.

The NMA has also asked Government to extend the scope when claiming relief. Current relief rules state that the hereditament must be occupied by a local newspaper and ‘wholly or mainly used as office premises for journalists and reporters.’

The NMA recommends that the scope should be expanded to include premises that are used for publishing activities and associated administrative services which contribute to the production of local newspapers. This would include editorial hubs and warehouses with printing presses.

Scotland has already passed an amendment to extend the business rates relief to news publishers. The amendment to the bill was moved by Murdo Fraser MSP, Conservative, commenting “As we know, local newspapers are a vital source of information, particularly at the present time, when people are seeking information about what they can safely do, what is going on in the world and what messages Government and health authorities are telling them. They often derive that knowledge from local newspapers. People may not be able to access local newspapers in physical form, but many local papers have websites that people are accessing.

“Local newspapers are important, but they are suffering extremely hard times at the moment. Those that have continued to publish have seen a collapse in revenue. Circulation is down 25 per cent. Advertising revenue is down 75 per cent, which is not surprising, as many of the businesses that would normally advertise, such as hotels, restaurants and retailers, are not operating. These are extremely difficult times in the world of local newspapers.

“Some famous titles, such as the West Highland Free Press, have stopped publishing altogether—at least in physical format—and maintain only an online presence. Others are struggling on in print, but all are in real difficulty.”

Scottish Liberal Democrat Alex Cole-Hamilton MSP said: “At a time when we are passing unprecedented levels of power to the Scottish Government, the UK Government and the police, it is absolutely vital that we maintain a thriving media industry to hold them all to account. That starts with our local papers.”

In light of this, the NMA has urged the Westminster government to follow the lead of their Scottish colleagues and provide additional support for local news publishers in England and Wales through business rates relief.

Local publishers, editors and MPs have all called on the Government to extend the business rates relief for news publishers.

In September, Labour MP Tanmanjeet Singh Dhesi pressed Government for business rates relief, speaking in the House of Commons: “We in Slough are fortunate to have two brilliant local newspapers, the Slough Express and the Slough Observer, which play a vital role in our local democracy and ensuring that the good people of Slough are well informed with reliable and accurate news reporting.

“But like many of their counterparts across our country, local journalism is under threat. Their trade body, News Media Association, has repeatedly called for business rates relief but those calls seem to have fallen on deaf ears, and the National Union of Journalists has proposed a detailed news recovery plan to ensure that the survival of excellent journalism is there for all of us.”

The Minister John Whittingdale responded: “I have no doubt that the newspapers in the honourable gentleman’s constituency are doing an excellent job and I have had a number of conversations with the News Media Association and other publishing organisations.

“The Government has extended the £1,500 business rates relief for local newspaper offices, but obviously we will continue to look at what additional measures we can take to support newspapers.” 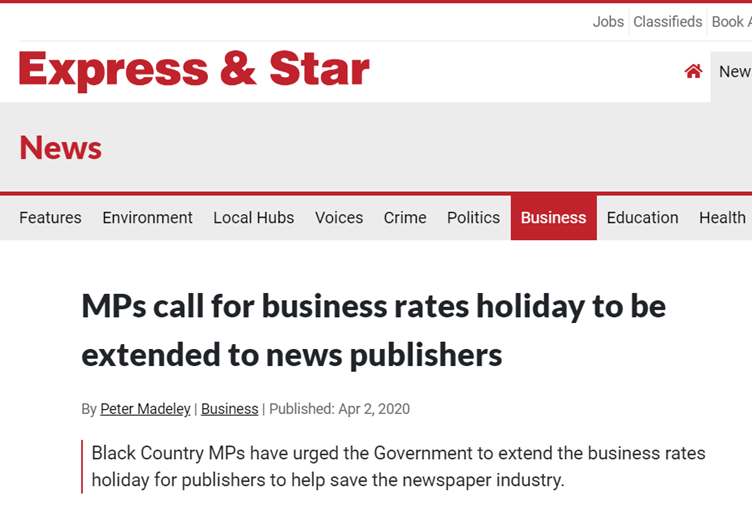 “We urge the government to urgently look at other initiatives such as business rates relief, support for public interest reporting and quickly progressing work to level the playing field with the tech platforms.” https://t.co/63y9hPluVq#supportlocalnews

News publishers and local editors have also called for Government to extend the relief, with Jeremy Spooner, chief executive of Baylis Media, commenting in the Slough Express: “Like many other businesses in our community, Baylis Media Ltd, publisher of the Slough and Windsor Express, has been severely challenged by the COVID-19 outbreak.

“We are appreciative of the support offered by the Government, particularly the furlough scheme, but due to the nature of what we do furloughing all our journalists was not an option.

“There are signs of a slow recovery but like many businesses more help is needed to overcome the financial effects of Covid-19 on our business.”