Fake local newspapers produced by political parties which mimic the look and feel of independent local papers are a “cynical” attempt to mislead the public which undermines trust in both politicians and local news media, News Media Association chairman Henry Faure Walker said.

Announcing the launch of the NMA’s ‘Don’t Be Duped’ campaign against fake local papers, Mr Faure Walker called on politicians to support local news media which has performed vital public service providing the public with trusted information during the coronavirus pandemic.

The NMA campaigned against fake local newspapers published by political parties during the 2019 general election but in recent months publications produced by the Lib Dems have started popping up again across the country.

In a report on the election, the Electoral Commission said it was a misleading campaigning technique which the public were concerned about.

In an op ed published in local titles this morning, Mr Faure Walker said: “Politicians at the top of Government – and no less than Her Majesty The Queen – have acknowledged the vital importance of our work providing the public with trusted information during the coronavirus pandemic.

“Why would any right-thinking politician seek to undermine this? Sadly, that is happening right now. As you read this, political propaganda leaflets designed to look and feel exactly like independent local newspapers are being pushed through letterboxes across the country.”

He added: “Make no mistake, these publications are designed to fool you into thinking you are reading independent journalism.

“In fact, they are the exact opposite – party political propaganda sheets masquerading as real newspapers. It has been reported that some of the leaflets are not clearly marked as being produced by the Lib Dems.

“We think this cynical attempt to mislead you is wrong. It undermines trust in both politicians and independent local newspapers.

“That’s why today, the local news media sector is launching the ‘Don’t Be Duped’ campaign to call out these publications for what they are and see them stopped once and for all.”

The NMA has written to Sir Ed Davey, Leader of the Liberal Democrats, and the Electoral Commission to explain the industry’s concerns and to call for an end to fake local newspapers. 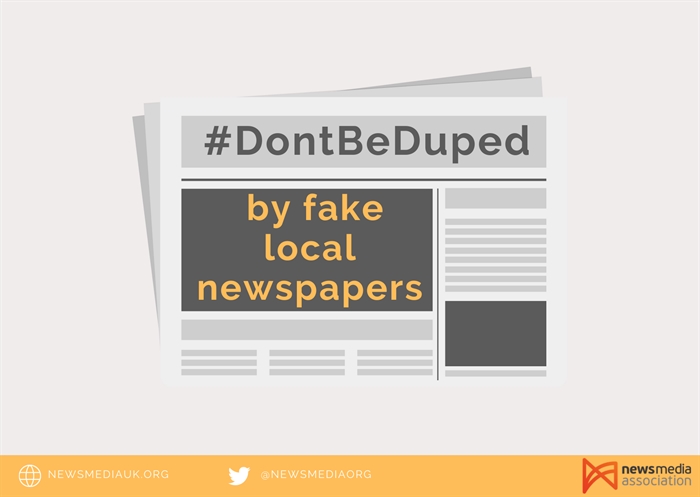