Reporters Without Borders published their 2021 World Press Freedom Index this week, showing that “journalism, the main vaccine against disinformation, is completely or partly blocked in 74 per cent of the 180 countries ranked”.

The UK is currently ranked in 33rd place, slightly higher than last year where it was ranked 35th. The UK’s global score is currently 21.59, down from last year’s 22.93. The RSF notes that press freedom in the UK remains a concern, citing “a secret Government unit” which “appeared to service as a clearing house for freedom of information requests” and media outlets being “blacklisted or facing other restrictions”, as reasons for their concern.

Europe, along with the Americas, remain “the most favourable continents for press freedom”, despite Europe registering “a sizeable deterioration in its ‘Abuses’ indicator” with violent attacks doubling in the EU and Balkans.

The Financial Times reports events in Hungary, Poland and the Czech Republic and the death of journalist George Karaivaz on April 9, have “underscored the precarious situation for independent journalism” in the EU.

“Idiosyncratic as they may be, these observations illustrate a sinister trend: that independent journalism is becoming harder and more dangerous to practise in parts of Europe”, the FT said.

“While such problems may be worse elsewhere in the world, a region wanting to “promote its way of life” must secure the conditions for an independent, critical fourth estate at home.

“Media freedoms are not a luxury; without them democracy and good policymaking wither. Mere expressions of concern from the EU and the rest of Europe are welcome, but too little and too late. Against those who would undermine public scrutiny, the best defence is a good offence.” 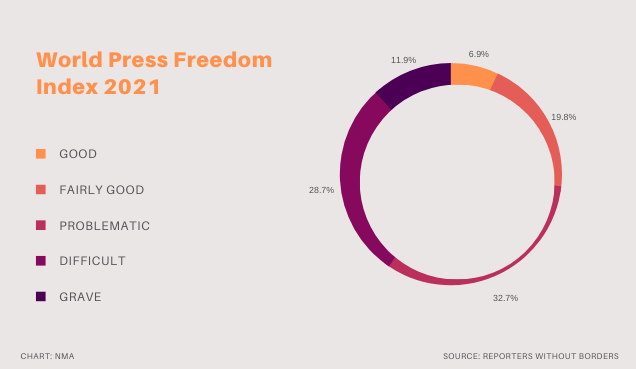 Christophe Deloire, RSF secretary-general, has said: “Journalism is the best vaccine against disinformation. Unfortunately, its production and distribution are too often blocked by political, economic, technological and, sometimes, even cultural factors.

“In response to the virality of disinformation across borders, on digital platforms and via social media, journalism provides the most effective means of ensuring that public debate is based on a diverse range of established facts.”

The Index reports only 12 countries (7 per cent) ranked as good, dropping from 13 countries last year. Countries considered “bad” include Brazil, India, Mexico and Russia, whilst China is considered among the Index’ worst countries, along with Turkmenistan, Eritrea and North Korea.