National and regional newspapers have reflected the public outrage about chief adviser to UK Prime Minister Dominic Cummings’ movements during the Covid-19 lockdown.

A poll commissioned by YouGov on 26 May with 2346 adults surveyed found 57 per cent agreed that the media have been fair in the way they have reported the story. 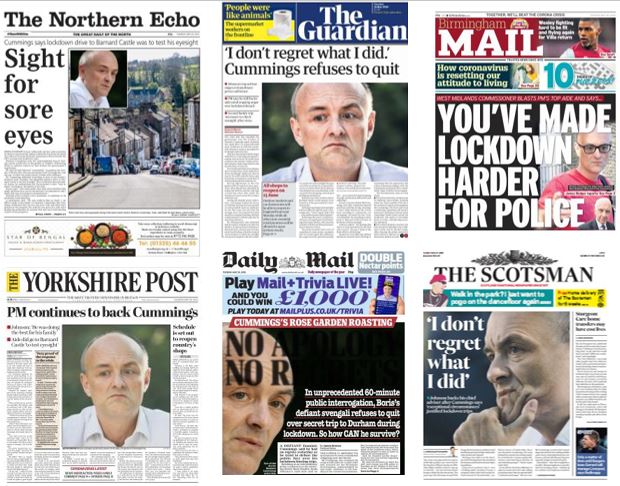 Speaking to HoldtheFrontPage, Northern Echo editor Hannah Chapman said: “The reaction from Northern Echo readers has been enormous, with the vast majority furious about Mr Cummings making the journey to this region, while others obeyed the ‘stay at home’ message in its simplest form.

“There has also been anger about the issue of people suspected as having coronavirus travelling into County Durham, potentially putting pressure on health services here, which went against everything the Government seemed to be advising – not to mention the idea of taking a drive across the county to ‘test his eyesight’ two weeks later.”

In an opinion piece in the Independent, John Rentoul said: “It is the strength of feeling among the public that is the main reason the government is finding it hard to move on. Despite Cummings’s attempt to suggest that people were angry because of “reports in the media that are not true”, this outcry has not been orchestrated by journalists … Of course, there is usually a two-way feedback between public opinion and the media.

“But at the moment, the traffic is all going one way. Journalists are reflecting public opinion, rather than stoking it. Indeed, so are Conservative MPs, many of whom say they have never seen a deluge of emails from constituents like it.”

An opinion piece in the Teeside Live said: “I can sympathise with Mr Cummings’ predicament and witnessed the evident pain he felt when reliving those details during his press conference.

“But the Prime Minister’s assertion that ‘every father would have done the same’ rings hollow, when the evidence shows that tens of thousands of families self isolated at home while ill, struggled to care for children or relatives, stayed away when loved ones were dying, and then missed funerals.

“[Dominic Cummings] has not apologised or shown any contrition for his behaviour, and the full machinery of Government has been cranked up to blame anyone but him.”

An editorial by the Mail said: “It’s claimed by his supporters that the outrage over Dominic Cummings’s decision to flout lockdown rules is largely the confection of a cynical media.

“They argue that what was a minor infraction at worst has been blown out of all proportion, in a blatant bid to damage the Prime Minister through his most senior adviser. Inside the metropolitan bubble, his enemies – mainly from the vanquished Remain Left – may be howling for his head.

“But with ordinary voters, his defenders say, the story simply doesn’t ‘cut through’. Our poll today shows how spectacularly wrong they are. In the court of public opinion, Mr Cummings is very definitely guilty as charged. Eighty per cent of people believe he broke lockdown rules. Almost as many disbelieve his excuses. Sixty-six per cent want him to resign.”

In Scotland, Neil MacKay wrote in The Herald: “Left and right, Yes and No, Remainer and Leaver, the Daily Mail and the Guardian for goodness sake, even bishops and scientists – the entire country, bar a very few, have come together in a spirit of national disgust not seen since that woman threw a cat into a wheelie bin back in 2010.”

A Guardian editorial said: “Flying in the face of every opinion poll, the prime minister suggested that the public wanted to “move on”, having heard, he said, quite enough “autobiography” when it came to Mr Cummings.

“He rejected the idea that his adviser’s decision to follow his own lockdown rules could lead other people to do the same, placing lives at risk.…The refusal not only to sack Mr Cummings, but even to express regret for his behaviour, amounts to a crisis of leadership and authority at the top of British politics.”

The Yorkshire Post said: “The nation is bristling at the worst kind of betrayal. Our generals told us to march in one direction whilst they went in another. Once again, we are reminded of Boris Johnson’s College Master’s words in his letter to the now Prime Minister’s father: ‘Boris sometimes seems affronted when criticised for what amounts to a gross failure of responsibility (and surprised at the same time that he was not appointed captain of the School for next half).’

“Mr Johnson; it is not too late to show that you are worthy of captaining the school for next half.”

The Society of Editors has written to Downing Street to express concerns over the current row between the Government and sections of the media. Ian Murray, executive director of the Society of Editors said: “No administration that believes in a free media – and this Government has repeatedly stood by that assertion – can then decide which media it will respond to and which not.

“The mark of a Government that truly supports free media is one that steps up to the plate and answers questions from all sources even those it believes to be politically hostile.”

He continued: “We will be asking Number 10 to once again give assurances that all mainstream media will be treated equally, and that open Government will survive even during this time of crisis.”